From fear to recovery – Lensse’s story

Lensse’s story is all too common for women living in Ethiopia, where the shame and humiliation of a fistula injury is coupled with the fear of undergoing treatment for fistula through surgery. It takes a great deal of courage for women, who have often never accessed formal healthcare, to visit our hospital and the journey can be a long one. For Lensse, having decided to receive treatment for her injury she can now move forward without the devastating impact of an obstetric fistula.

A long journey of suffering

Lensse is from the Oromiya region in Ethiopia, from a small village called Intodalle. Raised in a remote rural village, she was given to a husband in an arranged marriage when she was only 15 years old. She left her parents’ home following a traditional marriage ceremony and travelled to a remote village with no infrastructure, including health care services, and she had to walk three hours to access basic facilities in the nearest small town.

After falling pregnant at 16, Lensse didn’t attend any health care services during her pregnancy and her mother and village traditional birth attendant supported her during her labour. For five long days, Lensse suffered through an intense birth and was made to continue to push in an effort to get the baby out. She fell unconscious due to her lengthy labour and eventually delivered a stillborn baby.

Not only did she have to come to terms with the loss of her baby, she also awoke to the discovery of her childbirth injury.

”When I wake up I felt some wetness from the bed and thought it might be water applied during the labour then I used my hands looking for dry area to sit on, the whole bed was soaked . From the smell of my hands l came to realise that it is urine, I buried myself inside the blanket with shame,” Lensse said of her experience following the birth.

Days passed with no change and Lensse’s husband took her to the closest hospital, which was the first time she had attended a hospital in her life. The staff referred her to Hamlin’s Addis Ababa Fistula Hospital and Lensse and her husband travelled six hours by bus to attend. Here she was able to arrange a date to have a life-restoring fistula operation – however, she was terrified of having surgery. On top of this, within a month her husband left her.

Hamlin staff at the hospital were aware that her case was complicated due to her lengthy labour which caused serious damage to her bladder and she needed diversion surgery. Despite attempts to encourage Lensse to follow through with the surgery, she became distressed and requested to be sent home. Torn between her extreme fear of surgery and living with urine flowing constantly for the rest of her life, Lensse left and returned to the hospital three times before going through with the surgery.

The turning point came when she saw the reaction of other villagers to her condition. “One day while I was walking in the village I see villagers cover their nose while they pass by me, I get back home and cried the whole day then decided for myself to get the surgery that I was phobic of than living in such a way,” she explains. 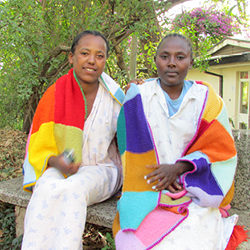 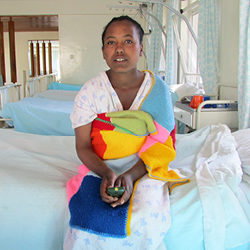 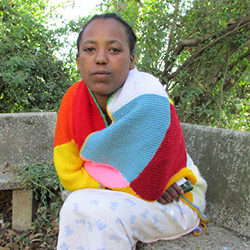 It ended up taking two years for Lensse to decide to proceed with treatment of her fistula. She eventually had the surgery and it was a complete success. During her stay, following treatment, Lensse had also been under the rehabilitation and reintegration training at Desta Mender, our rehabilitation training centre just outside of Addis Ababa. With the seed money she received from the program, she opened a small inn near her village and started generating her own income to cover her living costs. The reintegration process for Lensse included preparation of a business plan, facilitating a work premises and other aspects of building the business.

By the time of this interview, Lensse was in the hospital for her second follow up after surgery and is looking happy and thankful for her life-changing intervention. She plans to finish her medical check as soon as possible so she can return to running her own business at the inn.

“Those who used to covered their nose at me, now regularly visiting my inn and served with tea and bread, you all are the reason for all these big changes in my life I thank you; I am unable to pay back in kind but I promise to be a role model in the village working hard on my business and teaching the community about this devastating injury,” Lensse says.

Tragically, 350,000 women die each year around the world from complications during pregnancy and childbirth. 93% of obstetric fistula survivors give birth to stillborn babies. Dr Catherine Hamlin was well aware of the terrible impact of childbirth injuries in Ethiopia and has made it her life’s mission to provide treatment for fistula survivors. Her dedication has meant that over 50,000 women have been successfully treated and have had their dignity restored.

If you take the time to donate to our charity today, you’ll be helping to restore the lives of women in Ethiopia.