A meeting with the Emperor

It’s not every day that you have an audience with the Emperor, yet Dr Catherine Hamlin was able to arrange one for two visitors from Australia in the 1960s, Sul and Suzanne.

Dressed in their finest clothes, the three women drove to the palace and awaited their meeting with the Emperor Haile Selassie. As they entered the reception room they beheld the Emperor perched on his throne, flanked by his Minister of the Court. Bowing low as they were formally presented, Sul and Suzanne were nervous as they presented a gift to the Emperor. Sul’s hands shook as she attempted to open the box containing a present of silver coffee spoons with opal inlay on the handles.

Catherine details in her book, The Hospital by the River, how the Emperor intervened:

“Leaning forward, his Majesty said, ‘Let me try,’ and clicked open the catch with ease. I noticed a distinct twinkle in his eye as he did this.” 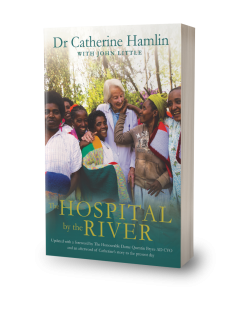 Rumours abounded that the Emperor, who had a penchant for lions, kept a lion in the hall of the palace. Catherine doubted the plausibility of this until she came across a lion sitting in the hall outside the reception room for dignitaries. Restrained, the lion lay quietly as it was petted by Catherine’s guests.

Catherine has enjoyed several interesting experiences with lions during her time in Ethiopia. In The Hospital by the River, she recalls attending a wedding reception where she encountered a lion named Jumbo:

“The reception was in progress when Reg walked in and said, ’I’ve just been patting a lion but he seems more than a cub so you had better not go out there, as it might be savage.’
I was too curious to heed his advice so I went out to the verandah and saw a beautiful lion who padded up to me and seemed friendly. As I patted him he scratched my arm, possibly playfully, but I was not sure, so I hurriedly retreated to the safety of the drawing room.”

This year marks 60 years since Catherine and her late husband, Reg, arrived in Ethiopia. In the 60 years since they first arrived, over 60,000 women have had fistula repair surgeries. Catherine’s tireless work seeks to eradicate fistula. Forever.